Click here for the introduction to the Round and Square series "Primary Sources."
One year ago on Round and Square (24 April 2011)—Durkheim & Mauss Primitive Classification
Click here to access Round and Square's "Primary Sources" Resource Center
Over the course of the next year or so, Round and Square will take readers step-by-step through a very particular kind of primary source—the elementary school readers used in the mid-1980s in the Republic of China educational system. Every schoolchild on the island of Taiwan read these texts back then, and they are the foundation for understanding matters of education, acculturation, language acquisition, and translation. They were also the source of a very large chunk of my early anthropological and historical education. 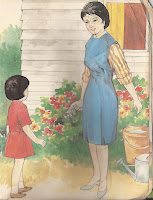 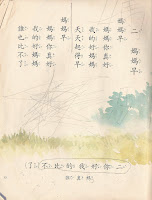 The second written text in a child's Republic of China education (in 1985) is brief and seemingly simple. It has the echoes of the first reading, which students would have studied (and been tested on) a few days before. It plays a little with grammatical "reversals," in which a construction is turned on its head to remind the student of the many ways things can be said...or written. And then it ends with a grammatical rock'em-sock'em punch. Who can compare to her? The English words are simple, but it will take the college students of Chinese in North America and Europe at least a year to get comfortable with the five characters at the end of the text.
Now that's culture (and language).

Text in Simplified Chinese (简体字)*
二 妈妈早
妈妈早。妈妈你真好。 我的好妈妈，天天起得早。
妈妈早。 妈妈你真好。 我的好妈妈， 谁也比不了。
*A simplified text is unthinkable in an ROC worldview. I don't "work" for them, though, and am including it for two reasons. First, an almost disturbingly large number of my students these days can't read traditional characters. This is a travesty, but I acknowledge (grudgingly) the reality. Second, it should be an eye-opener for students on either side of the "simplified/traditional" divide. Just look. Finally, if you want to read anything written before 1950, you need to learn traditional forms. Get over it. It's not political. It's literature...and politics and history. If you can only read simplified forms, you can read what (Mao) wrote, but not what he read. Think about it.


History and Culture Notes
Never forget that these books are intended to grow a certain kind of young Republic of China citizen. The fact that the nuclear family dominates in these early texts is unmistakable. While it could be argued that this reflects the experiential world of the children at this age (without doubt), there is clearly an ideological component, as well. The rhetorical tone has something Americans might recognize as a "Dick and Jane" heterosexual nuclear family unit quality to it, and it weaves its way through all six grades of the elementary school readers (and far beyond, I should note).

The mother-daughter relationship bears mentioning here. The text is brief, but note the family and gender dynamics of the early texts in these first-grade (first semester) readers. There is a fairly conscious balance, even though gender roles (note that the mother has a wash rag in her hands) do not push the interpretive limits very far.

Translation Notes
As for language-and-culture, let's take the obvious translation issue (this is relevant whether or not you know Chinese). The characters 媽媽 are read "mama." I have translated them as "mother." This was not a difficult decision for me. I interpret the phrasing as personal and familial, but have regarded the tone of the text as formal. I could have written "mama" in English, but it didn't seem to fit the picture or the rhetorical setting for these first few texts. There is room for interpretation here, as there is with translations of 好. I have rendered those as "best" and "wonderful," depending on the situation. I am open to the variations, but these "felt right" for me after living with these texts, in a manner of speaking, for a quarter century.


Language Notes
We start with the most basic of grammatical patterns. It is hard to beat "媽媽早" for simplicity. Even the next sentence (媽媽你真好) is fairly basic, but it at least has a modifier thrown in—Mama...you are really great. If this were a slower course, it might read 媽媽早，媽媽好. O.k., or not...

It gets a little bit more complicated from there, but never forget that every schoolchild knows all of this already, since she learned to speak, usually at home, in her first five years. Note the way in which the textbook writers use variations on 好. Now we have 我的好媽媽—my wonderful mother. After that, we echo the first text, which speaks to the virtues of getting up early. So mother gets up early every day (天天起得早). The beginning of the last couplet (as it were) repeats the possessive use of  in a family relationship (我的好媽媽)...before the blockbuster.

Yup, we end with "My ethereal mother, who could compare to likes of thee?" Sort of. The last five characters are worth pondering, especially if you are a little fuzzy on some of the more idiomatic constructions in Mandarin Chinese (which, at least in my day, were not covered very deeply by the first- and second-year textbooks). 誰也比不了 is a phrase you had better learn if you plan to live in Chinese. It is everywhere—like katakana in Japan. The only "easy" issue for the beginner is the first character, 誰 ("who"). Most non-native speakers do not automatically think to include 也 (also). The phrase 比不了 just needs to be memorized. Period. If you don't, it will haunt you to the end of your language-studying days. It is a slippery little fish, so don't assume that one translation will hold in all cases. We'll hook 'em as we see 'em in this series, but pay attention.

What could compare to that? Nothing compares to that.