Click here for the introduction to the Round and Square series "Primary Sources."
One year ago on Round and Square (26 April 2011). Evan Connell's novel, Mr. Bridge (the ending).
Click here to access Round and Square's "Primary Sources" Resource Center
Over the course of the next year or so, Round and Square will take readers step-by-step through a very particular kind of primary source—the elementary school readers used in the mid-1980s in the Republic of China educational system. Every schoolchild on the island of Taiwan read these texts back then, and they are the foundation for understanding matters of education, acculturation, language acquisition, and translation. They were also the source of a very large chunk of my early anthropological and historical education. 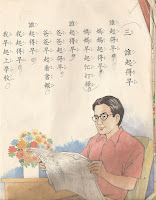 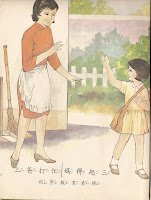 Getting up early won't go away. We are into our third primary school text (out of 276 over six grades), and the focus on nuclear family relations and individual gumption just won't quit. Everyone is Ben Franklin...except this is (the Republic of) China...in 1985.

And everyone gets up early. Period.

As we head into our first "review" period (there is a review and a significant test after every three language texts), it is worth considering the social, familial, and gendered implications of the lines we have read thus far. They are weighted toward the women of the family, and only three figures...figure...so far. The only challenge is that daddy is reading the paper and mommy is sweeping the courtyard. Put on your seat belts. This is going to be a bumpy gender ride through sixth grade.

Text in Simplified Chinese (简体字)*
三 谁起得早
谁起得早？ 妈妈起得早。妈妈早起忙打扫。
谁起得早？ 爸爸起得早。爸爸早起看书报。
谁起得早？ 我起得早。我早起上学校。
*A simplified text is unthinkable in an ROC worldview. I don't "work" for them, though, and am including it for two reasons. First, an almost disturbingly large number of my students these days can't read traditional characters. This is a travesty, but I acknowledge (grudgingly) the reality. Second, it should be an eye-opener for students on either side of the "simplified/traditional" divide. Just look. Finally, if you want to read anything written before 1950, you need to learn traditional forms. Get over it. It's not political. It's literature...and politics and history. If you can only read simplified forms, you can read what (Mao) wrote, but not what he read. Think about it.

History and Culture Notes
I find it impossible to miss the dominance of the young woman (it is not exactly clear if she is elder sister or little sister from the context, but there will be four of them soon enough). Indeed, if you follow the rhetorical flow of the readers, it is as though "elder sister" begins the process and everyone else follows from there. Just watch, but never forget the gender implications of everything you read from here on in. Just watch.
It is not worth belaboring at this point, but it is easy to see how powerful the "early-to-rise" rhetoric is in these formative texts. They would all be the first things formally memorized by students, and never underestimate how important such matters can be in developing the psyche of a young citizen.

Translation Notes
You will see that I found the opportunity to mix formality (in English) with familial informality. There is no way (in English) to render precisely the cultural pattern of formal (hierarchical) deference and family closeness. I have done my best by contrasting "father" and "daddy," as well as "mother" and "mommy." It is not perfect, but it gives a sense of the complexity of these matters (which cannot really be rendered adequately in English).

The "grammatical" translation issues are not formidable here. In fact, they all surround the nouns at the end of the "couplets." Mother (mama) beats the broom (打掃). I say that she sweeps the courtyard, and I make that decision based on the picture and the context of other elementary school texts which will follow. Father reads the newspaper (書報). I really want to say "morning paper," (as I do in the notes, below), but I held back and did not interpret whether daddy is reading last night's late-edition or the very-early edition of today (in 1985, both were readily available).

The last "couplet" is easy. I go to school. The only thing challenging the reader is the cadence. The flow is just a bit "off" from mom's and dad's lines, and that is because it has only one character, while 媽媽 and 爸爸 have two. I still wonder why they didn't "even it out" a little bit. This would not be difficult. Maybe it is because we are reading and not chanting here. I don't know. I find it mildly jarring.

Language Notes
It is striking that the first-grade (first-semester) readers stress the adverbial use of 得 from the very start of primary education. This is not something to dismiss. There are three major uses of "de," and two of them (得, 的) have been introduced in the very beginning days of reading education. In these first three texts, it has focused on ...起得 (早/晚). The latter character (rising late) is only potential in a grammatical sense. It would never appear in the affirmative early-to-rise cadences of primary school texts, of course (but that is a cultural matter). Confucius, on the other hand, addresses this very issue. We're only in first-grade, though. That is a long way away.

The primary contrast is between 起得早 and 早起. This is not particularly hard to see, but I find it striking that the text seems determined to ram it into the consciousness of the little first grader who would be reading this. Mother, father, et moi all (都) 早起...and 起得早.

One last word on new vocabulary. Now that we're a few days into our primary educations (in 1985), we can see the pattern that is developing for the little tykes. They learn to recognize about a dozen characters and are responsible for replicating about two-thirds of them. Recognition comes first...and then memorization (and testing). Never forget the testing.