From the Geil Archive (9)—Naming (Un)Conventions

Today's Round and Square Guest Contributor is Rachel Johnson. Rachel, from Burr Ridge, IL, just graduated from Beloit College with a BA in anthropology and a minor in Asian Studies. She was introduced to William Edgar Geil through a course taught by Rob LaFleur, and she is currently working in Doylestown, Pennyslvania with four other interns to digitize his archives with the Doylestown Historical Society. She and Geil share a mutual love of travel and of Chinese history and culture in particular, which is what drew her to study him further.
***  ***
Please note that all items marked "DHS" are property of the Doylestown Historical Society, and used with DHS permission. If you wish to use an image, you need permission of the Society. Please contact Robert LaFleur (lafleur@beloit.edu), and he will put you in contact with the appropriate people.

In today’s selection from the Geil archives, we get to see a fascinating side of Geil…how others saw him, at the time.  This comes in the form of a list of “helpful” suggestions---at least one of which ended up being more helpful than intended. 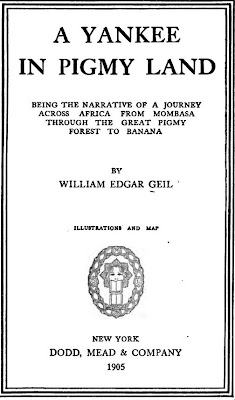 On Saturday, January 19, 1903, Geil was aboard the S.S. Anversville, crossing the Atlantic Ocean. He chronicles a conversation he had over dinner with two fellow shipmates, wherein he asks the two men for suggestions as to what he should name his latest book (referred to as his “Across Africa” book). He then goes on to list said suggestions, stating first that most were given “in jest.
And, indeed, many of the suggestions listed seem to be—at best—tongue in cheek, though some likely were more serious than others. Such suggestions include In the Darkest Heart of Africa (perhaps reminiscent of Joseph Conrad’s Heart of Darkness, first published less than four years prior to his writing this), In Brightest Africa, which provides a curious juxtaposition to the previous suggestion, Mr. and Mrs. Pigmy, which is perhaps the most jarringly irreverent suggestion of all, and, of course, A Yankee Thru Pigmyland, possibly a joking reference to his previous A Yankee on the Yangtze, but one which he certainly took to heart.

These suggestions show that, despite his popularity, despite his numerous publications, despite everything, Geil was not always taken seriously, even at the time of his travels. Certainly, he was respected, but lest we assume that his contemporaries saw him as the infallible Big White Chief (a title he bestowed upon himself), we can be reminded, on occasion, that even this larger-than-life missionary and explorer had his share of troubles along the way.

More importantly, we are reminded that not everything is all fire and brimstone with Geil himself. The fact that he recognized the jokes in the suggestions his companions gave him, and, what’s more, recorded them in his Great World-wide Travel journal, suggests that he could take a joke with the best of them…and perhaps, though this might be wishful thinking, perhaps there is some of that same tongue-in-cheek self-deprecation in his final title, A Yankee in Pigmyland.
Posted by Round and Square at 12:00 PM