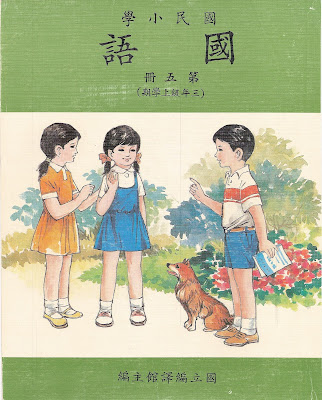 [16]
Back in the apartment, I set the bags of books on a table. I made myself a little pot of Oolong tea, fed the parakeet, prepared a little bowl of pistachios, and settled in for a few hours of exploring. Sometimes you just know that you are in a moment you will remember for a long, long time. This was one of them. As I pulled the neatly wrapped books out of the bags (the clerk had organized them by grade level, packed them in wrapping paper, and tied each with a handy little cellophane knot), I arranged them in stacks on the table. After twenty minutes of knot-cutting, unwrapping, and arranging, the books formed a miniature Taipei landscape in a day before truly towering buildings came along. Twelve-plus years of education lay before me. Where should I start?

I reached for the high school history texts.

I couldn't help myself, and temporarily tuned out the advice I had heard in the bookstore an hour before. In minutes I was immersed in books entitled 歷史. I paged through Chinese history and world history—early and late. Names such as 秦始皇帝 (the first emperor of Qin) and 明太祖 (the first emperor of Ming) vied with 圖坦卡蒙 (Tutankhamen) and 哥倫布 (Columbus). To be sure, the language looked like a bit of a challenge. At the very least, I saw, I would have to learn a few hundred—and more likely a few thousand—more characters, as well as ten times that many vocabulary items.

I approached the matter with the respect it deserved, yet I could not help but sense that (despite the challenges of fairly advanced language) this was familiar territory. I had just spent the better part of a history major in college thinking about these matters, and (despite the language issues) this didn't seem to be terribly difficult terrain in a conceptual sense. The names, dates, and terms were dense, but they were hardly new. This wasn't Foucault, I thought to myself. If I were embarking on an archaeological dig toward knowledge, I would be looking mostly at shrapnel I had seen before.


[17]
You see, even then I had begun to consider these books in the spirit of an anthropologist visiting a territory for the first time. I wanted to soak it all in—to remember how it felt in those early moments of cultural contact. I remembered what Jim Fisher, the anthropologist at Carleton who taught me anthropological theory and mentored me in Asian Studies, had told me before I left my Midwestern home for Taiwan. He stressed that I needed to take my early experiences seriously. The first impressions—even ephemeral glimpses—contained within them a conceptual power that we would do well to ponder. He reminded me of a passage in Claude Lévi-Strauss's literary-ethnographic masterpiece, Tristes Tropiques.

These lengthy and superfluous cogitations are leading up to the fact that
one morning, in February 1934, I arrived in Marseilles in order to tak ship
for Santos. Later there were to be many other departures, and all of them
have blended together in my memory, which has retained only a few
distinct recollections...

These ships called at many ports. Indeed, the first week of the trip was
spent almost entirely ashore, while the cargo was being loaded or
unloaded, and we sailed during the night. Each morning, on awakening,
we found ourselves docked in a new port: Barcelona, Tarragona, Valencia,
Alicante, Malaga, and sometimes Cadiz; or again, Algiers, Oran and
Gibralter, before the longest stretch leading to Casablanca, and lastly to
Dakar...It was the opposite of a voyage. More than a means of transport,
the ship seemed to us to be a dwelling-place and a home, in front of which
the revolving stage of the world would halt some new setting every morning.[1]

That is how I felt before my stack of books. The whirling energy of a new city and island had only—there, in the summer of 1985—begun to seem familiar to me. The fieldnotes that I wrote at that time were starting to reflect just that, and not the least in their growing infrequency. A flurry of powerful first impressions had given way to a flawed veneer of ostensible understanding. I sensed right then that I was missing an opportunity, and I remembered the next passage in Lévi-Strauss's account.

However, the anthropological approach was still so foreign to me that I did
not think of taking advantage of these opportunities. I have learned since
then what a useful training in observation such short glimpses of a town, an
area or a culture can provide and how—because of the intense concentration
forced upon one by the brevity of the stay—one may even grasp certain
features which, in other circumstances, may have long remained hidden.[2]


[18]
To my mind, the stacks of books on the table were so many ports on a sea voyage, and I was determined to take advantage of the opportunity to explore the textual ports on my own anthropological journey. And like the ports Lévi-Strauss mentions, some are a little more resistant to an individual's understanding than others. Barcelona isn't Dakar, after all. While I suspected that many of the texts contained treasures hidden from my understanding, I was seeing in them history of the kind I studied in high school—names, dates, and loose, ideological linkages between them. So, if the strained Lévi-Straussian analogy held in those moments, my "ship" was rolling into port, up I-94 and on to Fargo...but not through the narrow fjords on my way to Oslo. Or Hakodate.

It all seemed like I had been there before. Something was wrong. I got up, paced, checked on the parakeet, looked out the window, sipped my tea, and ate a few pistachios. I had seen this movie before. I thought it over, and then decided.

Postponing my entry into high school, I reached for the little green books. At last I understood: that's where I needed to start.

Bibliography
Lévi-Strauss, Claude. Tristes Tropiques. New York: Penguin Books, 1973.
NEXT
Elementary Communities
Even then, I had a strong suspicion about where this was all going. In time, I would discover just as many riches in those seemingly stale history texts, but that would lie many months in the future. Instead, I went to grade school, learned aspects of language, history, and culture that I doubt I could have learned in other ways, and found a community that lasts to this day.
Posted by Round and Square at 12:05 AM