This is not a train-wreck misspelling of "inspired." Not even close. In fact, it is quite the opposite when it comes to "meaning." We're talkin' boredom here, and it's a good word for the dog days (if I will be permitted the use of a foreign phrase) of summer.

Thomas Edison did not say that "Genius is one percent insipidity and ninety-nine percent perspicacity." Wow, though. Maybe he should have.

Let's start with insipid food. You are probably thinking of Lunch Lady Doris. I'm not. I am thinking of the food of my homeland. You see, some people think "insipid" when they see a lutefisk dinner. I see it quite otherwise—I see inspired. How many shades of bland white food (boiled codfish, potatoes, creamed cabbage, and lefse) create a Norwegian-immigrant rainbow of flavor? Well, at least three (like a trinity of off-beige).No one has ever been bored by lutefisk. "Insipid" would be bland, boring, tasteless...like Beef Wellington.

This does remind me of a New Yorker cartoon from the early 1980s. It showed a gleaming stainless steel semi-load powering down the interstate. On its side were three big words: "Cheap White Wine." Insipid. Every sip tastes like an instep (sorry).

Insipidity is also connected to cats, but not in the way you might think. Cats themselves are never boring, even though they spend a great deal of time being bored. This is all our fault. If you have ever stared into the eyes of a bored cat, you already know this.

Insipid. I get bored even thinking about it.

Examples of INSIPID
The soup was rather insipid.
An apple pie with a mushy, insipid filling that strongly resembled soggy cardboard...
While it is fashionable to write off that decade as an insipid time, one long pajama party, the '50s, in sport at least, were a revolutionary age. —Frank Deford, Sports Illustrated, 27 Dec. 1999–31 Jan. 2000

**(Beloit College students and faculty: this is available through the library. Many other RSQ readers may find the link through a college, university, or local library). The "OED" is the best, by far, of any English language dictionary on the planet. Among mere mortals, the American Heritage is superior to anything else (I have loved it since I was a child, and my father taught me the many meanings of "culture"). I use the Merriam-Webster site because it is solid and everyone around the world can access it. Find your way to AHD or OED, though. The latter is even worth $295 a year (seriously). Words matter. 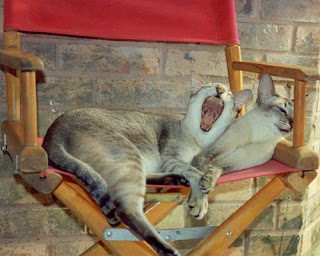 Now we come to the little twist that I didn't tell you about in the introduction to this series. If your native language is not English, go to the comments section and give a rough translation that "works" for you. I am hoping to get a whole passel of approximations for "insipid" in languages ranging from Belgian and French to Mandan and Urdu. And of course they will be approximations. Language doesn't have any exact equivalents. That would be boring (try to find a synonym for power ranger, for fictional strength's sake).

So what's a word that means something like "dull and bland" in your native language?

And, if you really want to think about how to make use of vocabulary, use a sentence that you might actually speak or write.

The combination of arrogance and insipidity makes most academic writing a
chore to read—a bit like wearing a hair shirt in a triathlon.

Insipid. It's as dull and listless as day-old kitten chow.