No, this word does not refer to the actions of an experienced, fastidious mother cat. It has nothing to do with licks at all...except for its effect on bored listeners and weary readers. At least in one sense, they take a lickin' from prolixity.

Prolixity is something we in academia understand well. We love to accuse others of it, too. In fact, one of our great pastimes is spent in criticizing the tendentious verbosity of others, all the while admiring it in ourselves. Our own words are, of course, nuanced, graceful, and necessary (every last one of them). Others, however, could use a little editing. 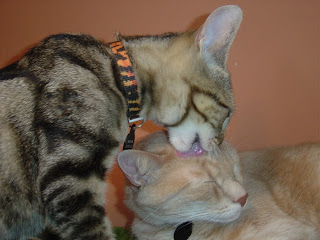 Prolixity? I resemble that remark.

This is a useful little word for other reasons, too. I remember advice from the novelist John Gardner, who wrote that aspiring novelists should learn—really internalize and use—all of the good, short words in the dictionary. Prolix is one of them. It packs a big, wordy punch in just six letters.

And what does prolixity have to do with cats? Well, nothing really. Since they can't write, they have had to learn other tools of domination, oppression, and overlordship. As I have noted elsewhere on Round and Square, they have trained their humans to use their big banana sundae-sized brains to find special ways to buckle under to feline will.

And many of us border upon prolixity when we write or talk about cats. Even Papa Hemingway waxed loquacious in the wake of kittens.

***  ***
pro·lix
adjective \prō-ˈliks, ˈprō-(ˌ)
Definition of PROLIX
1: unduly prolonged or drawn out : too long
2: marked by or using an excess of words
— pro·lix·i·ty noun
— pro·lix·ly adverb
Examples of PROLIX
The speech was unnecessarily prolix.
The speaker was known for habitually transforming brief anecdotes into prolix sagas that exhaust their listeners.
Origin of PROLIX
Middle English, from Anglo-French & Latin; Anglo-French prolix, from Latin prolixus extended, from pro- forward + liquēre to be fluid
First Known Use:15th century

American Heritage Dictionary
Oxford English Dictionary**
**(Beloit College students and faculty: this is available through the library. Many other RSQ readers may find the link through a college, university, or local library). The "OED" is the best, by far, of any English language dictionary on the planet. Among mere mortals, the American Heritage is superior to anything else (I have loved it since I was a child, and my father taught me the many meanings of "culture"). I use the Merriam-Webster site because it is solid and everyone around the world can access it. Find your way to AHD or OED, though. The latter is even worth $295 a year (seriously). Words matter.
***  ***
Prolix.

Now we come to the little twist that I didn't tell you about in the introduction to this series. If your native language is not English, go to the comments section and give a rough translation that "works" for you. I am hoping to get a whole passel of approximations for "prolix" in languages ranging from Croatian and Japanese to Norwegian and Tamil. And of course they will be approximations. Language doesn't have any exact equivalents. That would be boring (try to find a synonym for 小朋友, for primary school students' sake(s).

So what's a word that means something like "tediously wordy" in your native language?

And, if you really want to think about how to make use of vocabulary, use a sentence that you might actually speak or write.

The professor's prolix tendencies were most obvious when we asked him
questions in class. It would start slowly with a little verbal trickle and then stream
forth from small rivulets to a veritable torrent of explanation.

Prolix. It's a flowing river of words, dammed only by the insubstantial tools of punctuation and breathing.