Click here for an introduction to the Round and Square series Argonauts of the Seinfeldian Specific.
Click below for all "Seinfeld Ethnography" posts:

Click here for the reference to the "Argonauts" title, below. 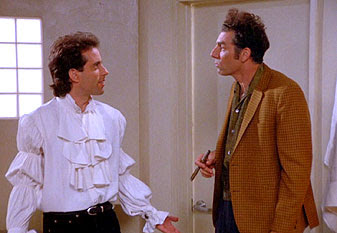 Argonauts of the Seinfeldian Specific
For me, it's pouffy, but that is a minor issue. The shirt hit the fan in the larger society in season five (1993) of Seinfeld, not the least because all of us have been made to look ridiculous at one time or another. It usually happens in early childhood, when we are made to dress up for impossibly cute and cliché-ish pictures. It simmers. Later on, the funny clothing usually takes the form of uniforms (from sports to work), as well "required" dress that lacks sufficient instruction.
Try writing "formal attire recommended" on an American, middle-class social invitation. Be an anthropologist. Examine the range of perceptions (and sartorial choices) that can be made to fit into that category in an ostensibly egalitarian society. Really. Just watch.
There is more, though. There always is more when it comes to social practice. Why do we wear what we do? Is our clothing social? Yup. Everything is social...at least insofar as even our brains have evolved in consummately social environments. Still, we are used to thinking that clothing—above all, clothing— reflects our individuality... Get over it. Americans are obsessed by the intersection of attire and individuality, and it ripples in and out of the fashion industry, to the point where the most counter-culture, "independent" Americans today seem to be those without tattoos. What a concept. Did you wear school uniforms? Did you hate them? Why? Turn the question around, now. Did you wear a sports uniform? Did you like it, and did you "identify" with the school or club to which it corresponded? Why...?
Why? There is nothing simple or straightforward about these matters. If you are like most people, you hated the one uniform and loved the other. If you begin to ponder the situation, you might sense differing levels of "social cohesion" related to the various uniforms and the situations in which you wore them (just a little "Durkheimian" stab in the dark). What is it about clothing, society, fashion, and individuality that gets us so worked up...and confused at the same time?  Is it ever just a shirt? Is it ever as simple as "nice pants"...? And what about casual Fridays? What do we make of those calendro-sartorial oddities? Does any of this even begin to make sense?
The "Puffy Shirt" episode of Seinfeld explores these intersecting social phenomena, along with "photogenic hands" (George) and "low talkers." We may return to one or both of the latter in future installments of "Argonauts." For now, though, it is all about clothing. Clothing is social...and individual. Take a look at the various clips and realize, at the very least, that there is a great deal more going on than "but I don't wannna be a pirate!" Note, as well, Kramer's role of "social interpreter par excellence." No one "gets" or "translates" society's oddities as well as Kramer. He's like an urban shaman.

I think it's fair to say that "puffy" cycles through our fashion (social) circles fairly routinely, and it isn't going away anytime—ever.  Even if we don't want to be pirates.

Puffy Theory
Now, let's read a few social theorists. From Immanuel Kant to Pierre Bourdieu, and with Alfred Kroeber and Erving Goffman in-between, we have a tiny sampling of the many writers who have had something to say about style, self, and society. This is only the beginning, folks. We have not even begun to explore the social and cultural world of fashion.
Erving Goffman, The Presentation of Self in Everyday Life
Expression, then has been treated in terms of the communicative role it plays during social interaction and not, for example, in terms of consummatory or tension-release function it might have for the expresser. Underlying all social interaction there seems to be a fundamental dialectic. When one individual enters the presence of others, he will want to discover the facts of the situation...Full information of this order is rarely available; in its absence, the individual tends to employ substitutes—cues, tests, hints, expressive gestures, status symbols, etc.—as predictive devices. In short, since the reality that the individual is concerned with is unperceivable at the moment, appearances must be relied upon it its stead. And, paradoxically, the more the individual is concerned with reality that is not available to perception, the more must he concentrate his attention on appearances.[1]
Alfred Kroeber and Jane Richardson, On Fashion
It is evident that the basic features of style as distinct from more rapidly fluctuating mode, being taken for granted at any given moment, are largely unconscious in the sense that they are felt as axiomatic and derivations are made from them, but they are not tampered with, except again unconsciously. This in turn seems to imply that the role of particular individuals in molding basic dress style is slight.[2]
Immanuel Kant, Anthropology from a Pragmatic Point of View
One may therefore explain taste as follows: "Taste is the faculty of aesthetic judgment which makes universally valid discriminations. Taste is, therefore, a faculty of the social judgment of external objects within the imagination. Here the mind feels its freedom in the play of images (therefore of sensibility), since sociability with other people presupposes freedom; and this feeling is pleasure. But the universal validity of this pleasure for everyone, whereby discrimination (of the beautiful) with taste is distinguished from discrimination through mere sense perception (of what is only subjectively pleasing) that is, of what is agreeable, contains the concept of a law within itself, because only in accordance with this law can the validity of satisfaction be universal for the person who makes the judgment. The faculty of perceiving the universal, however, is the understanding. Thus, the judgment of taste is just as much an aesthetic judgment as it is a judgment of the understanding; but they are both in combination (and therefore the latter is not considered to be pure).[3]
Pierre Bourdieu, Distinction
Sociology is rarely more akin to social psychoanalysis than when it confronts an object like taste, one of the most vital stakes in the struggles fought in the field of the dominant class and the field of cultural production. This is not only because the judgment of taste is the supreme manifestation of discernment which, by reconciling reason and sensibility, the pedant who understands without feeling and the mondain who enjoys without understanding, defines the accomplished individual. Nor is it solely because every rule of propriety designates in advance the project of defining this indefinable essence as a clear manifestation of philistinism...
Here the sociologist finds himself in the area par excellence of the denial of the social. It is not sufficient to overcome the initial self-evident appearances, in other words, to relate taste, the uncreated source of all "creation," to the social conditions of which it is the product, knowing full well that the very same people who strive to repress the clear relation between taste and education, between culture as the state of that which is cultivated and culture as a process of cultivating, will be amazed that anyone should expend so much effort in proving the self-evident fact. He must also question the relationship, which only appears to be self-explanatory, and unravel the paradox whereby the relationship with educational capital is just as strong in areas which the educational system does not teach. [4]
All italics mine
[1] Erving Goffman, The Presentation of Self in Everyday Life (New York: Doubleday Anchor, 1959), 249.
[2] Marvin Harris, The Rise of Anthropological Theory (New York: Columbia University Press, 1968), 341.
[3] Immanuel Kant, Anthropology from a Pragmatic Point of View [transl. Victor Lyle Dowdell] (Carbondale: Southern Illinois University Press, 1978), 143.
[3] Pierre Bourdieu, Distinction (Cambridge: Harvard University Press, 1984), 11-12.


NEXT
Wednesday, April 27th
Poppie's Hand-Tossed Pizza
Poppie tells Kramer that cucumbers don't go on pizza. Poppie doesn't wash his hands. Plenty of theoretical discussion can be generated from these two scenes.
Posted by Round and Square at 12:05 AM