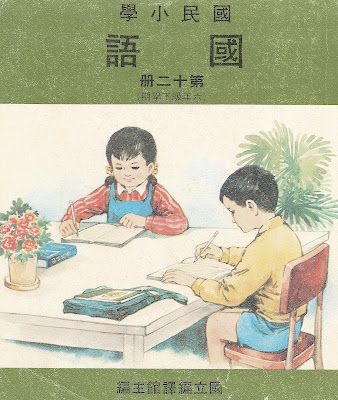 [12]
Now that we have considered a wide range of issues in Chinese education (information that that careful reader of this series will need as she proceeds with the relentless series of texts that will follow) it is time to narrow our focus. We head to the Republic of China on Taiwan—an isolated little rebel province that started to wonder what it might be like to go it alone. At least for a little while. That "little while" started in the late-1940s, and had already lasted in an official sense for thirty-seven years when my Korean Airlines flight landed in the middle of a sea of rice paddies...in the middle of the Reagan administration.
So there I was, in the summer of 1985, peering over the odd syntax of classical Chinese in Confucius's Analects. I had a private tutor who was determined to teach me the classical language in the "right" way—with the Four Books (四書). This was the way education had been envisioned for the intermediate learner since the time of Zhu Xi (1130-1200). This had some significant advantages for a relatively ambitious, relatively young student who wanted "the real thing." I wanted to combine the difficult task of learning the classical language (as I spoke about it then) and gaining substantive knowledge of Chinese literature that would help shape my thinking for the future. I didn't want just language drills.


[13]
As I sat in my little study area in my Taipei apartment, I chanted the various lines from the storied texts. In the spirit of beginnings, I memorized the immortal lines from both Confucius and Mencius that everyone in China's history who has ever opened a book (or bamboo pouch).

子曰學而詩習之不亦悅乎   有朋自遠方來不亦樂乎  人不知而不慍不亦君子乎
The Master said, 'Is it not a pleasure, having learned something, to try it
out at due intervals? Is it not a joy to have friends come from afar? Is it
not gentlemanly not to take offence when others fail to appreciate your
abilities?'[1]

孟子見梁惠王   王曰叟不遠千里而來亦將有以利吾國乎  孟子對曰王何必曰利
亦有仁義而已矣
Mencius went to see King Hui of Liang. 'Sir,' said the King. 'You have come
all this distance, thinking nothing of a thousand li. You must surely have
some way of profiting my state?' 'Your Majesty,' answered Mencius. 'What
is the point of mentioning the word "profit"? All that matters is that there
be benevolence and rightness.[2]

I was entranced. As I went deeper and deeper into the texts, I felt that I was becoming a part of an educational tradition that stretched back for a millennium...and two, and three. I could not help but dabble a bit in the Daoist arts—or at least the classical texts—and I was powerfully intrigued by Zhuangzi's little treatise (I use the word with irony that a Daoist might appreciate) on the butterfly dream.


[14]
It all started with that butterfly revery. It occurred to me that—by chance as I thought then—I had never really encountered the word "butterfly" in several years of college language texts or several hundred pages of classical literature. That may have been coincidence, of course, but I thought not—decidedly not. An air of disgusted frustration overtook me as I started to ponder the problems associated with studying slices of social and cultural life. I had already had this on my mind for some time.

It was hard not to miss the stacks of books in Taipei bookstores with "Business Chinese" in the titles. Just a quick perusal of their vocabulary lists told me that this approach was exactly what I wanted to avoid—a partial and ultimately flawed approach that privileged words like "equity" and "market," while ignoring "cognition," "comity," "enculturation"...and butterfly. I had even seen bits and pieces of this in the scholarly world. While overwhelmed with admiration for the depth of learning of some of the greats in Chinese studies (and I have used the translations of two of them here in homage to how much they shaped the field), I had already begun to suspect that some of that vast learning was shaped like a cheese wedge. It was thick and truly substantial regarding various historical, philosophical, or literary matters, but narrow and flecked in other areas—like lived experience and everyday life in the present. Sure, some of this is inevitable. I knew that even back then, when I hoped that I might be able to learn it all. Still, I wanted a more consistent hunk of the sinological world.

I thought, walked, and brooded. Where had all the butterflies gone?


[15]
All through my first months in Taipei, I walked some of the same streets covered in my initial fieldnotes. Down Kuan-chien Road I walked before dipping into alleys, byways, and avenues. All that while, I routinely passed a dusty little bookstore that barely caught my attention—until the day I read about Zhuangzi and the butterfly. It was the Ministry of Education publishing company, and it was fronted by a retail book operation with stacks of green volumes bearing pictures of studious little children being good Republic of China citizens. The little store that for months was beneath my consciousness—if not contempt; these were children's books, after all—suddenly showed itself in a new light. The store was the same as before, but I had changed.

"I'll bet they have butterflies," I mumbled to no one in particular.

The door creaked open, and I can still remember the thick, olfactory resonance of dust, humidity, and paper. I knew I had found a linguistic and cultural home, and that I would never look at elementary education the same way again. If anyone noticed the foreigner amidst the kids' books, I couldn't tell. Most of the work was taking place in the back rooms, where (I later learned) huge stacks of graded readers were being readied for shipment to schools all over the island. The next semester always beckoned, and staff members were far too busy to ask silly questions such as "may I help you?"

I negotiated the narrow aisles, noticing the full range of K-12 books. There was composition, science, history, and classical Chinese. Many of these texts were used at the middle school and high school levels. I picked them up and put them on a table. The stack was growing. A staff member noticed, and came to help. She pointed me toward the elementary school readers, and said matter-of-factly: "That's where you need to start." Until that moment, I had assumed that I would start with seventh grade. Even then, I did not think that elementary school texts would be necessary. I was a big boy, after all.

"That's where you need to start," she repeated. Suddenly, it all started to make sense. My anthropological training, historical study, and language learning all converged. I knew that she was right. I gathered up all of the K-6 "language arts" books, added them to the 7-12 stack, and paid the bill—startled by how reasonable book prices could be when the future of the citizenry depended on it.

I hailed a cab, positioned three bags of books next to me, and thought about butterflies.