Over the course of the next year or so, Round and Square will take readers step-by-step through a very particular kind of primary source—the elementary school readers used in the mid-1980s in the Republic of China educational system. Every schoolchild on the island of Taiwan read these texts back then, and they are the foundation for understanding matters of education, acculturation, language acquisition, and translation. They were also the source of a very large chunk of my early anthropological and historical education. 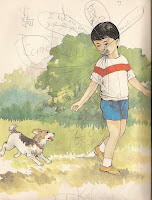 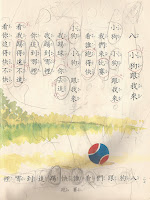 For the second lesson in a row, the little readers in Taiwan (c. 1985) are talkin' to animals. Yesterday, the little girl did a bit of code talking to a branchèd bird. Today, the little boy talks to a dog—presumably his dog, given the familiarity of the language. So what's up with all of this animal talk? Is it a precursor of primary texts to come—the tympanic drumbeat of something we will come to call a theme?

To underline what I mentioned yesterday, animals play a large rhetorical role in the primary readers put forth by the Ministry of Education in the Republic of China. I can attest that they play almost the same role in the People's Republic of China textbooks, as well as those used in Japan. Similar points could well be made about elementary school books from all over the world. Let's think about that, and begin to tease out some of the implications. Let us not forget that this is the cultural tradition that gave us a certain monkey king "who" has transcended temporal, cultural, and social boundaries.

And, yes, I have my reasons for writing "doggie" and not "doggy" (see below).

跑     賽
Text in Simplified Chinese (简体字)*
八   小狗跟我来
小狗     小狗     跟我来
我们来比赛
看谁跑得快
小狗     小狗     跟我来
我踢球     你去追
我踢到哪里
你追到哪里
看我踢得远不远
看你追得快不快
*A simplified text is unthinkable in an ROC worldview. I don't "work" for them, though, and am including it for two reasons. First, an almost disturbingly large number of my students these days can't read traditional characters. This is problematic, but I acknowledge (grudgingly) the reality. Second, it should be an eye-opener for students on either side of the "simplified/traditional" divide. Just look. Finally, if you want to read anything written before 1950, you need to learn traditional forms. Get over it. It's not political. It's literature...and politics and history. If you can only read simplified forms, you can read what (Mao) wrote, but not what he read (unless it has been edited and adapted). Think about it.

History and Culture Notes
There is not much in this text that separates boy and dog in Taiwan from boy and dog in Arkansas, Bavaria, or Alsace-Lorraine. As with yesterday's text, the tone and detail is almost generic—as though the story were written for everychild, everywhere. This is hardly insignificant. One thing I noticed back in 1985 on the little subtropical island was the influence of Western (and predominantly American) sources on children's literature. It was almost as though there were two distinct sections in every bookstore's section for children. On the one hand, there were hundreds of books detailing famous stories from China's past. These will figure prominently in these primary texts, as well. On the other hand, an almost equal number of books were devoted to translations from the West (from The Brothers Grimm to Disney).

This series of posts is devoted to understanding primary education as historically and culturally configured, and it will be useful to think about the relationship between various images. That "nature," for example, figures prominently in these texts is telling, especially for a society that has a large percentage of its population in cities. The relationship to animals should not be dismissed as mere children's fare, either. I would go so far as to say that it echoed (and reinforced) what was only the beginning of a large growth in pet ownership on the island. This was not an unchallenged trend, and I find it very interesting that pet texts, as it were, are quite abundant in the K-6 curriculum (c. 1985).

That's enough for now. Remember: my aim in these notes is to raise issues that will circle back to us (over and over again) as we proceed.

Translation Notes
First, why would I write "doggie" in English, and not "doggy?" This was simple for me. I channeled Roy Rogers. Monsieur Rogers, of course, knew that the spelling was dogie (with a slightly different pronunciation, too). I get it, but still couldn't resist.

You will notice that I translated the title as "...little doggie" (小狗), but the first line as "doggie." As you know if you read a little Chinese, the "little" in front of dog works in something like the following manner: "Doggie" =sum (小 x .33 + 狗 x 1.0). In other words, 小狗 is a combination in which the adjectival modifier is a good deal more subtle (to the point of nonexistence in many situations) than something along the lines of "gigantic asteroid." I wanted to give English readers a little sense of the diminutive mixed with Roy Rogerian lyricism...but only in the title. From there, it's all "doggies," all of the way down.

It is worth noting a small translation challenge in the phrase 跟我來. If you have spent a little time with etymology—or have read enough to understand phrases such as 小孩兒跟著他 (the child is following him)—you will know that it would be possible to write "come follow me." I think it should be obvious that the tone of this text is somewhat more collegial in its friendly competitiveness.
Language Notes
Just a few notes. First, continue to pay attention to the use of 來 and 去 in the texts. One of the reasons that I keep mentioning this (and will continue to do so) is that I was surprised, when I started living the language, to notice how "thick" it was with syllables that did not fundamentally change (from my beginner's perspective) the meaning of the sentence. I can't help but think of my reaction back then when I compared my thin, rice gruel-style foreign learner's syntax and the thick, breakfast porridge of language as it was actually spoken. Later, I would see a parallel to this theme in the 虛字 (empty characters) of the classical language. More on them later; we're still in first grade here.

Notice the parallelism in the text. Yes, I blush to use that term—originally learned in hours spent with classical literature—in a story about a boy and his dog. It doesn't change the fact that it's there, though, and it should not surprise us that this powerful literary and cultural structure would be introduced early (and often). On top of that, take a look at how various lines rhyme (or not). The first three lines all rhyme (來賽快). Notice how the columns, after an echo of the first 小狗小狗跟我來 start to take on a number of patterns. To begin, 來 and 追 are a stretch when it comes to rhyming, and any attempt to follow through is gone by the time we hit the 裡s. This is not at all a criticism, of course, I just want language learners who are interested in these matters to pay attention to parallelism and rhyme. Watch for it.