The Cortex Chronicles (1b)—Punting Down

We covered a good deal of territory yesterday, moving the conceptual football right down the field before running out of time (and my new, self-imposed word count). That's why we're here today. It's time to see what comes next, and how the punt works in the big world of football decision-making. If you recall the New York Times article in yesterday's post, you will know that fourth down represents a choice. I underline this point for readers who are less familiar with the rules of American tackle football than shirtless males donning cheeseheads on frigid autumn afternoons in Wisconsin.

This (the rules, not the cheeseheads) came to my attention the other day when my wife told me the story of an acquaintance, born in the former Soviet Union and living in the Connecticut, who had become quite taken with the hoopla surrounding American football—from Saturday afternoon college games to Sunday...and Monday professional contests (this was in the era before every day of the week had been overtaken by the pigskin juggernaut). In any case, he was explaining the rules to a friend who was just learning about the game after a lifetime of watching international basketball, gymnastics, skating, and, of course fútbol. The explanation went something like this:

You have three chances to advance the ball. These are called "first down,"
"second down," and "third down." You may run or pass, and your goal is to
advance at least ten yards down the field. If you are successful, you get
three more opportunities to go another ten yards (and so on). If not, there is
a thing called "the punt." If unsuccessful, third down is followed by
"the punt."

This astute ethnographer of American football had just hit the interpretive nail on the head, even as he pretty much got it all wrong. Anthropology is full of such cases, and Bronislaw Malinowski is lucky that he didn't have Trobriand islanders blogging about the weakness of his explanation of the kula ring. No matter, the outside observer of American football was onto something in his error. His reasoning was inductive—a little like the classic "swans are white" error made by earlier philosophers. You see, our friend had seen so many examples of coaches calling for a punt on fourth down that he assumed that was what the rules called for. If you failed in three attempts, he reasoned (based on many hours of observation), a punt was required.

This is as fascinating as it is mistaken, because it speaks quite directly to the point of the New York Times article. Coaches don't take risks if they can avoid them. Even though they are not required to do so on fourth down, they choose to punt in an overwhelming majority of cases. Why? If you remember the article, it is because it is a lot safer to lose a game by doing what everyone else does than to lose it doing something bold, "risky," and even audacious. Barry Switzer learned this a few years back in perhaps the dumbest fourth-down decision ever made. As in war (and love), the bold borders quite closely on the idiotic.

Intrepid coaches get fired. The nail that sticks out gets pounded down (出る釘は打たれる).

Of course, risk-averse coaches get fired, too. The perception is that this happens less often. All I know is that risk aversion requires full "participation" of the frontal cortex. This is sometimes in direct contradiction to the brain chemistry of others who are less invested in the long-term results of the decision. If it doesn't work, and their team loses the game, they'll get on with their lives in a day or two. The focal point of their brain operations is not the frontal cortex (it is possible that full engagement with reasoning qualities would preclude the wearing of foam hats in the first place). For the passionate fan, the bubbling juices of the brain's limbic system (this is my humanistic rendering) create torrents of emotion that cause them to cry:

Coaches rarely do so. Even when the ball has crossed the midfield stripe, coaches often punt, even if it only ends up netting them twenty yards or so. If you have watched football, you have seen this before. With the ball on the forty-two yard line of the opponent (only forty-two yards to glory), the call comes to punt the ball. The poor punter has very little margin for error here. The best result is a punt that rolls out of bounds on the opponent's one-yard line, pinning them so far back that now they have little room for error and a high bar for success (ninety-nine yards to glory).

This is the optimal situation. A forty-one yard net gain in turf, and a far more secure defensive position than before. Good stuff. That is the kind of decision that retains jobs.

The problem is that punters are not machines. As we discussed yesterday, things can go terribly awry. Let's imagine the same situation. The ball is on the forty-two yard line, and the punter is called back to work. The ball doesn't always trickle out of bounds at the one. Just one more oblong roll and it might traipse right into the end zone. The difference (only a few feet in a physical sense) is enormous in a cultural-rules one. If it rolls into the end zone, the opponent gets to start operations on the twenty-yard line. What has been gained in that case? Twenty-two yards, and pretty much back to where things stood on the first play of the game. Is it worth it? Is twenty-plus yards worth giving the ball to the other team and reverting to defense? Is a little swath of turf worth giving up the control you possess?

Yup. A whole bunch of coaches would say that it is. In fact, many bet their jobs on it.

So it's all about field position, then? Really? The commander (a.k.a. head coach) assesses the situation, goes back to the ol' memory bank of previous situations, and makes a decision. More often than not, the decision is a carefully guarded one that errs on the side of prudence. And you can't spell "caution" without "cortex." Well, sort of.

That is what we will consider tomorrow.

Click here for the other elements of this mini-essay on punting and brain chemistry: 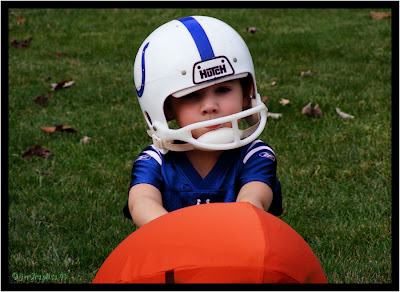