Over the course of the next year or so, Round and Square will take readers step-by-step through a very particular kind of primary source—the elementary school readers used in the mid-1980s in the Republic of China educational system. Every schoolchild on the island of Taiwan read these texts back then, and they are the foundation for understanding matters of education, acculturation, language acquisition, and translation. They were also the source of a very large chunk of my early anthropological and historical education. This is not a "language learning" series. It is meant to be an inquiry into the territory where studies of history, language, and culture meet.

I encourage readers of Round and Square to follow these posts whether or not they read Chinese. It is clear enough where I begin speaking to language learners (it starts in the "translation notes," but it is worth hanging on through there, even if you have never seen a Chinese character in your life). The section called "language notes" at the end is geared to people who have learned a little Chinese. Everything else, with the exception of the actual Chinese text, can be understood by anyone who takes the time to think about what an entire education from the ground up might be like. How many of us have thought about that element of culture since we were twelve years old? Only those terrific teachers who keep the society of learners moving along. In the meantime, take a look at how first-graders (for that is where we begin) started to read their world in Taiwan a generation ago. This is "textbooks from history," and there is much to learn. Let's get to work. 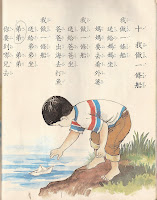 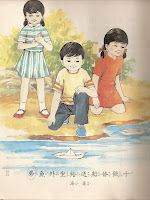 Now that we have a proper introduction to this series, it's time to get back to the elemental lessons of childhood in Taiwan (c. 1985). "I Make a Boat" helps us redevelop our sea legs, as it were, and we have here a studied combination of craftsmanship and play that will weave its way through the K-6 waters of Republic of China education.

It is not just youthful engineering that is at work here, though. Rich networks of kinship pulsate just below the surface of this little narrative. The small craft propels real relatives on imagined—though significant—journeys to aid, feed, and teach the tiny domestic community. We conclude with our little boat builder in the role of teacher, asking the kind of question that should spur little brother and all of those reading along...where would you go?

十  我做一条船
我做一条船送给妈妈坐妈妈要去看外婆
我做一条船送给爸爸坐爸爸去海去大鱼
我做一条船送给弟弟坐
弟弟 弟弟 你要到哪儿去
*A simplified text is unthinkable in an ROC worldview. I don't "work" for them, though, and am including it for two reasons. First, an almost disturbingly large number of my students these days can't read traditional characters. This is problematic, but I acknowledge (grudgingly) the reality. Second, it should be an eye-opener for students on either side of the "simplified/traditional" divide. Just look. Finally, if you want to read anything written before 1950, you need to learn traditional forms. Get over it. It's not political. It's literature...and politics and history. If you can only read simplified forms, you can read what (Mao) wrote, but not what he read (unless it has been edited and adapted). Think about it.

History and Culture Notes
Craftsmanship and kinship cohere in this story, and the emphasis is decidedly on the latter. We learn nothing beyond hints in the pictures about the size, structure, and condition of our narrator's seaworthy craft. This is the stuff of childhood imagination, we are "told," and we had better suspend our disbelief before we head out onto the waves. This is no ordinary boat. Let's call it the Love (of kin) Boat.

You see, this text is about family. Our narrator makes his boat for others to do things. Never, ever forget that primary school texts take the lived worlds of children and refocus them (with writing and pictures) on larger social questions. This little paper boat is carrying a much more serious cargo than might appear to the reader who considers such stories to be merely "childish." Yup, childish—the very future; the heartbeat of a growing and changing society.

Nope, this idea is so big that you are going to have to read all of the way to the end to see why Marcel Mauss wrote an entire book about it. It's about gift-giving and reciprocity and filial piety. Because it is wrapped up in a Chinese phrase, even readers of English should try to make their way to the end. You will find one of the big ideas of world philosophy—the nature of exchange—at the heart of this (seemingly) simple little text.

Translation Notes
Even the beginning reader of Chinese can see clearly the difference between "I make a boat" and "I make a—measure-word—boat. 一條 takes up some formidable space in these here pages, as we say in textual analysis discussions back home in the heartland. How to translate yitiao? Easy—don't. There is no way to give the English reader a sense of the combined ubiquity and omnipresence of measure words in Chinese. Over the years, I have thought about ways to give hints of it. Only in an odd snatch of phrase here or there is it possible.

For those of you who are sticking with the post beyond the history and culture notes, a measure word is a character that comes between the number of a thing and the thing itself. We say in English "a boat" or "three boats." In Chinese we would say 一條船 or 三條船. The character 條 is the "measure word." I had a student who, during a group dinner during a fieldwork course I was teaching in Shanghai in 2004, said: "I wish I would have been born fifty years later." I was blown away. I asked him why, assuming that we were opening the doors of futuristic thought, and considering a world that would be profoundly different from the one we have known. "Why, why?" I asked. "Because then I wouldn't have to learn measure words; measure words are fading, and I figure that they'll all be gone except [the generic] 個/个 by then." This was a bit of a letdown for me, and I am not sure that he was right.

Still, measure-words are often the bane of Chinese learners' existences. There are different ones for different kinds of things. Long, cylindrical objects have one, boats have another, big structures (like mountains and skyscrapers) have still another. It is not unlike having to remember that geese come in gaggles and fish come in schools...but much more common. Translating it is, well (-nigh) impossible. If readers have ideas, have at it in the comments. It works...sometimes. Usually it doesn't

Language Notes
Since I spent so much time, above, on measure words, let's put the next common-but-tricky phrase down here in the language notes. 送給 is not complicated, but it is a little prickly, and it laps up against the shores of translation issues. A literal translation of the first three lines of the text reads in very clumsy fashion. One cannot give in English a precise sense of the gift like nature of the child's presentation without sounding a bit awkward. He doesn't exactly "present" or "bequeath" the boat to his mother. He gives it to her to ride (in). Songgei is clearly of vital importance to the text writers, repeating it thrice, as they do. In English translation, each phrase becomes more and more problematic. For better or worse, I have not tried to convey the "gift" dimensions of the Chinese phrase, preferring to let the common English language idea of "father-mother-brother can ride in it" do the job of moving the brief narrative forward.

I am open to change, though, and this is a terrific example of a very simple first grade text being quite challenging in a cultural sense. The Gift is important. The child is giving a present fashioned by his own bricolage loving hands to senior (father/mother) and junior (little brother) alike in acts of filial and fraternal devotion. Marcel Mauss would be jumping up and down on his work bench as his friend Marcel Granet explained its implications in a Chinese setting. In other words, that little 送給 is a great deal bigger than you ever might have guessed. Huge swaths of cultural and "encultural" territory are being mined here, even though it just seems like a little "kids story" with a great deal of repetitive verbiage.