III
Reading Like a Ruler
As I began my graduate studies, I distinctly remember the first time I encountered the great twentieth-century Chinese scholar Liang Qichao’s (1873-1929) writings on the Comprehensive Mirror. He referred to it as an “imperial textbook,” with the work’s primary readers being the emperor and his closest ministers. It seemed to me that Liang was describing the work as a case study manual for those who would run the empire. I could not help but think of law schools and business administration programs, where studying cases forms an educational foundation. I also grasped a subtext of Liang’s message—understanding the Comprehensive Mirror would require time, patience, and a great deal of literary sleuthing. It would not be easy. It was organized so differently from other works of history that just making sense of its twisting narrative threads was a challenge of its own. Most of all, I began to sense a conflict between the reputation of the author and his book. Liang Qichao and his younger contemporary, Hu Shi (1891-1962), admired Sima Guang for what they saw as his “rationality,” even as they reviled his positions on the political matters of his time.  Great historian; reactionary politician—this is a theme that has followed Sima Guang and the Comprehensive Mirror since the eleventh century. It is still strong today.
In those first few months of graduate study, I also came across a story about Mao Zedong (1893-1976) on the Chinese Communist Party’s 8,000-mile Long March, sitting on a donkey and studying the lessons of the Comprehensive Mirror.  I had to pause and consider this image—slowly fleeing the enemy on donkey and reading a text nine centuries old. Patton didn’t do that.  I was intrigued by the image of Mao, the peasant intellectual turned rebel leader, studying one of the most complex books ever written in China. He was equally vociferous in his condemnation of Sima’s politics in the eleventh century, yet he studied Sima’s history at his four-legged, moving, writing table with ears. Is there a contradiction here? I don’t think so. It is not difficult to come up with examples of writers whose elegant texts clash with political or social positions they took beyond their libraries. T.S. Eliot and Martin Heidegger spring immediately to mind. It is hard to ignore their works, despite the fact that we might find the authors lacking in certain respects. As for Sima’s Comprehensive Mirror, Mao deeply admired the book; less so the man.
He probed the text. Indeed, on my office shelves I now have a four-volume set of the Comprehensive Mirror that includes all of Mao’s annotations over the years, complete with illustrations of the Chairman pondering a dog-eared edition by lamplight. The peerless leader fancied himself an intellectual, and—bridging two distinctive eras—he wielded a pretty fair literary brush and pen.  His engagement with the Comprehensive Mirror goes even beyond “book smarts,” though.  Think about it.  Writers are often told to “read like a writer”—to mine essays, poems, and novels, asking themselves exactly what the author was doing (“why does it say that right here?), even as they think about precisely how they might write a particular scene of their own. 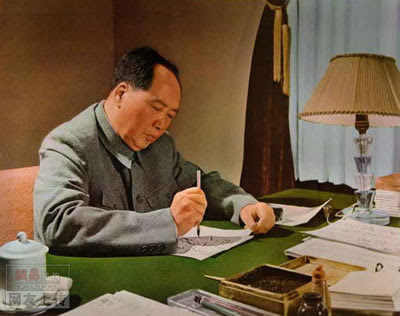 Zhang Zhupo (1670-1698) describes this kind of reading  in the context of complicated 100-chapter novels—a method for “reading like a writer” that would keep ignorance (and deception) at bay.
You must read [the narrative] as though it were your own work in order not to be deceived by it, [and it is] even better to read it as a work that is still in the early planning stages.  Only if you start out with the assumption that you will have to work out every detail for yourself in order to avoid being deceived will you avoid being deceived.[i]
In short, if you just read like everybody else, you will be deceived. No, if you want to do it right, you need to work out all of the details for yourself. That is reading like a writer. Well, Mao was reading like a ruler, mining a lasting book for ruling techniques from the past. He studied the Comprehensive Mirror for snippets, clues, and details (“why did that general retreat just then?), even as he asked himself how he himself might deal with similar situations. He worked out the details for himself.

This is a kind of historical reading that is lauded more than it is practiced, and which requires a great deal more skill than a hackneyed goal of “learning history so as not to repeat it” (one of the weakest statements ever made). It requires a special skill that combines reading, thought, action, and reassessment. If practiced rigorously, it is one of the highest skills of statecraft, and not just any “casebook” will do. Mao demanded a work that would sustain methodical use—a work that would stand up to real managerial understanding.
I was powerfully struck that Liang and Hu, two progressive scholars from a vibrant era of change during the fall of imperial China, as well as the leader, the “great helmsman,” who founded the People’s Republic of China, all found in the Comprehensive Mirror inspiration for managing very modern problems in China’s tumultuous twentieth century. In different circumstances, all three of these figures might have managed China, in one way or another. Even in times of strife, they all studied a book that was written nine centuries before their time.  What was going on here?  How can we make sense of that much intellectual firepower centering on a book that was almost a millennium old?

And who was this Sima Guang, whose history they admired and politics they loathed?

Weekend (3/26-27)—Breaking the Vessel (4)
We will look at little Sima Guang (1019-1086), a budding historian even at the age of seven, who was able to move “from text to action." In a famous episode (one immortalized in the Beijing elementary schools’ first year curriculum), the little boy saved his drowning friend, even as his more athletic peers stumbled and floundered. His actions show a path toward historical and managerial understanding, as you will see. It will be worth the wait, and enjoy the "short entries" that are joining the blog in the meantime.
[i] David Roy, "How to Read the Chin Ping Mei," in David Rolston, How to Read the Chinese Novel (Princeton: Princeton University Press, 1990), 224.  Italics mine.