Click here for other posts in Round and Square's "Rural Religion in China" series:

We are going to dive into the heart of Marcel Granet's pensée cyclique in this series, and seek to understand just what makes Granet difficult to read in some places. We will also examine why he can seemingly be so obtuse in others, such as his implication that rainbows appear because people gather in fields during the early spring for their rural festivals. More on that in a few days. Suffice (it) to say that Granet is sometimes as clear as a social-theoretical clarion, sometimes obscure, and occasionally exasperating. He is, in my opinion, a thinker of great brilliance who most interpreters have failed to understand precisely because they haven't read all of his work...and with the care it demands. His student, Rolf Stein (1911-1999), was troubled by this very issue, writing the following in the introduction to an equally obscure, cyclical, and brilliant work called The World in Miniature.

In his courses, [Granet] forced us to analyze texts on our own, to
examine them critically, and to draw from them the maximum amount
of knowledge. The questions he asked were designed to elicit not
necessarily an immediate solution to any single problem, but a slow,
progressive journey toward personal discovery. If he was not always
pleased with our replies, this was simply because even the most
advanced student could not hope to reach the high level of a master
like Granet.

In order to work as Granet did, a student would have to have complete
knowledge of ancient Chinese literature, for Granet set down this general
principle: no single detail of any civilization can be understood and
explained except in the context of the entire civilization, just as in a jigsaw
puzzle the meaning of a piece can be seen only when it is put into it place
in the larger picture. Any interpretation from the outside, based on a priori
principles, was immediately rejected. Only those who have completely
misunderstood Granet could accuse him of holding preconceived ideas.
He always refused, for example, to “explain” a legend or a myth on the
basis of any “theory.”

But he did actually have one preconceived idea: that of the importance
of his method of working. He would accept only explanations that resulted
from casting a new light on facts by putting them side by side, revealing
their relationship to each other, and finally grouping them into a whole.[1]

To my mind, Rolf Stein "got it," and the many China scholars who admire one of Granet's books—the unparalleled La Pensée Chinoise (1934)—but harrumph with dismissive tones at the rest of his oeuvre (I know some of these people)...are wrong. Dead wrong. To show and tell just how dense, fascinating, and complicated Granet can be, I have a plan: this series will be devoted to working carefully, page-by-page, through every word of every book that Marcel Granet ever wrote.

You think I'm kidding, don't you?

Well, I'm not. I started this set of essay-notes while in Hikone, Japan during the summer of 2004. It was the time that I started going more deeply into my French sinology project—the one I have come to call La Pensée Cyclique. Working every single evening at a desk that gave me a nice view of Lake Biwa, I began analyzing Granet's work, statement-by-statement, and then writing about it. This is an exercise that, while "involved" (let us not underestimate that), can be life-changing. I chanced upon it as a work method when, frustrated by the ways that busy scholars have dismissed Granet, I thought about how to explain what seemed clear to me in his writing. I remembered that, more than twenty years before that summer, my Shakespeare professor in a class at the University of Minnesota had described the way he worked every single night of his life. He would finish dinner, sit down (I imagined a nice glass of wine), read a scene from one of Shakespeare's thirty-eight plays, and then write for an hour or more about it. At the time, I could not imagine anything so strange, but what he said next was even more surprising. He told us that he put them into a file cabinet and never looked at them again. The process itself, he maintained, changed everything. 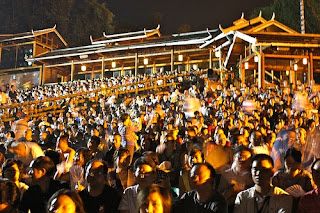 I was intrigued, but not enough to follow his advice and do a little bit of daily writing as part of my class work. Still, the example stuck with me, and I turned to it that humid, lakeside summer when I was in need of something strangely different in my own research and writing. I remembered Professor Rosenthal and all of those nights he spent reading just a few pages of the bard, followed by writing, writing, and more writing. I still couldn't understand why he put them in a file cabinet and walked away (he didn't have a blog, I guess), but it turned out to be one of the most productive turns I have ever taken. It slowed me down to the point where I paid the kind of attention usually only given by translators. They need to focus on every single word, no matter what. This was almost like that—reading so carefully that every sentence mattered. It was productive, and slow, work. These posts—which will go on and on for many years and cover every one of Granet's published books—will take the curious and serious reader through the published thinking of one of the greatest scholars of the twentieth century. As I wrote in the overall introduction to this series, it is the least we can do for a truly inspirational scholar.